Deny
Allow All
Back to site 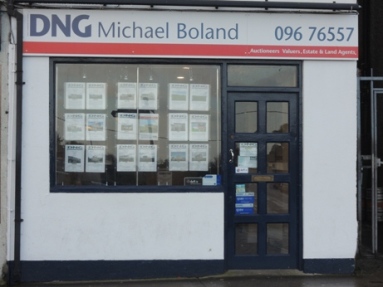 DNG Michael Boland, Ballina, Mayo is a multi-disciplinary agency in the involvement of residential, commercial, and agricultural sales, lettings and valuations in the north Mayo /South Sligo region. We are a second generation estate agency operating since the mid-70’s. Currently owned and run by Michael Boland Jnr. since 2005, when we joined the DNG nationwide franchise.

Michael Boland Jnr. Managing Director carries out and signs off on all valuations personally. Michael Boland, Managing Director attended college in Dublin and worked from 1998 to 2005 for Young’s Auctioneers and Valuers, Ranelagh, Dublin 6. During this time Michael specialised in residential and investment sales coupled with valuations and worked his way up to become a partner in 2003.

In 2005 Michael returned home to his native home town of Ballina and took over the family practice, expanding it into the DNG (Douglas Newman Good) nationwide franchise. The business has evolved and survived the recession to become one of the leading property consulting agencies in the region and currently employs more people than ever. Our turnover has increased year on year and the business is continuing to grow.

We are fully bonded and a qualified member of the IPAV since 2005, having qualified in Tallaght IT. We qualified to the European Group of Valuers Association TEGOVA (Blue book standard) in 2014.

Michael is an active business member in the local community and is involved in working groups to promote and sustain employment in investment in the town of Ballina and confines. These include the Heritage Community, The Mary Robinson Centre and the Lions Club.

We currently operate one branch in Ballina, Mayo under the umbrella of the DNG nationwide which is currently the number one estate agency network in Ireland with over 70 branches nationwide and growing.